MARGUERITA'S ODYSSEY - SAN FRANCISCO TO BEAUCAIRE , FRANCE
by Sidney Alderman
As you may know, I sold Marguerita last April to John Zunino of Mill Valley who had sold his business and was planning to move to southern France. He wanted an old wooden classic to live aboard, and with no previous boating experience, he undertook the arduous task of getting Marguerita to Beaucaire, a village on the Rhone River, about 60 kilometers north of the river mouth.
At first, John planned to take Marguerita through the Panama canal, across the Caribbean, across the Atlantic and part of the Mediterranean, under her own power, carrying an extra 700 gallons of diesel fuel on deck, in bladders, for the leg from Bermuda to the Azores. We talked him out of that, and he ended up having her transported from Ensenada, Mexico to Palma, Majorca on a yacht transport ship.
The run from San Francisco to Ensenada under her own power turned out to be a three-day piece of cake, with no major problems. Loading onto the submersible ship was also problem free. The ship hit bad weather between Panama and Fort Lauderdale , where she made a stop, and Marguerita took some stress to the hull planking with the pitching and rolling. The transport company told John to have pumps on hand for the unloading in Palma in case Marguerita was no longer water tight. She did start taking on water at delivery, but this stopped after a couple of days.
John had hired a retired British tug boat captain who knows the local water ways to drive Marguerita from Palma to Beaucaire, and this grizzled old seaman did the job in seven days. They headed northwest from Palma in calm seas and made a stop on the Costa Brava, north of Barcelona . From there, they followed the coast to the Gulf of Lion where they ran into very rough weather with southeasterly winds and steep waves. They took refuge at the fishing port of Sete where they entered the inland water way and the Rhone- Sete canal. This canal took them directly to Beaucaire, a distance of about 75 kilometers, although they had to saw off the mast and dismantle the radar to get under some bridges.
The photo was taken last week at Marguerita's new berth in Beacaire. We might consider forming a new Southern France Fleet for the CYA. 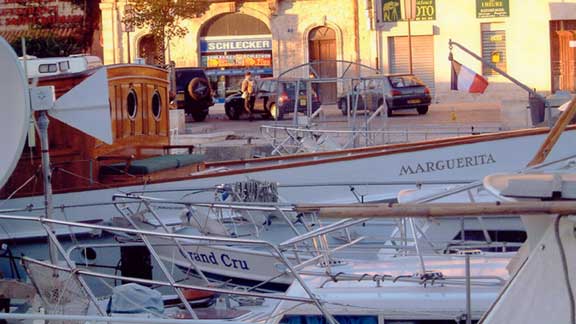